The last of the festivals in a year that has been full of them, Linkylea is the purest of all. With all profits going to help fund an orphanage in India.  I caught the bus from Edinburgh to Haddington at 5pm on Friday afternoon. Once in Haddington I really had no clue as to where I was heading. This was to be a Divine first. I soon found my bearings and asked a taxi driver if he could direct me to the road that would lead me to The Coulston Estate. Of course he knew the way. So with rucksack on my back and wardrobe in tow, I began walking. Luckily a car passed me and then turned round, a friendly voice beckoned. Hi Divine, jump in. I’ll drive you to your destination. Good Time!
***
I was greeted by a warm welcome committee and directed to Artists camping, surrounded by creative friends I erected my tent with the help of Roy McGlynn and made my bed. This was such a wonderful venue lush and green, the surrounding trees majestic without any hint of the Autumn colours that I had expected. With so many friends in one place hugs and kisses were happening at every turn. I made for The Phoenix Lair to borrow a sleeping bag. (I forgot to pack one) Such was my grattitude that I built and lit a fire for the benevolent litter pickers and then headed for the main communal fire to fulfill my four hours of fire tending. Breaking the shift at 10.30pm I headed to Granny Radges Tent to witness the rather brilliant Supa N DaKryptonites. A young local Edinburgh based band that are beginning to make waves nationally. With an excellent brass section (The trumpet player has the longest dreds I have ever seen) And vocal sparing duties shared by Romance of the year. Jay Supa and Sarah Knowles. Jay first blew me away at one of The Beat Master General‘s nights MCing over dynamic drum and bass with vocal gymnastics that blew me out of the water. A poet of our times. This was to be a sensational performance that had the tent bouncing. The band only started at the beginning of the year and have graced some of the biggest stages in Scotland. When a band works this hard with such passion. The future success are guaranteed. 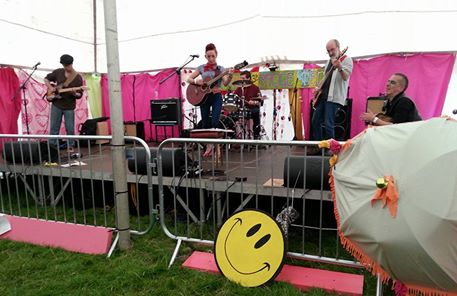 Divine playing with the Mean Reds

After the performance I returned to the communal fire to fullfill my fire tending duties, Heading for my comfy cozy borrowed sleeping bag at 2am. I slept soundly! Awakening to the sound rain drops the following morning, rolled a bifter and meditated. The rain drops stated falling harder, and drops of heavenly water started dropping through the roof of my tent. Oh dear I thought. This was when The Benevolent Phoenix Crew came to my rescue for the second time in 24 hours. Milk lent me a tarpaulin sheet to secure the dryness of my sleeping quarters and wardrobe. I headed for breakfast with Tara after kitting her out with waterproofs for her rather wet shift, we enjoyed a yummy breakfast in the warm dryness of Granny Radges Punk Rock Marquee. After breakfast I started my make up in preparation for my percussion duties with Martina Cannon And The Mean Reds. I was feeling very funky indeed. As usual the rhythm section arrived first, Dougie Mathieson and Pete the kit drummer (I arrived the previous night) Martina is a true rock n roll professional and always arrives bang on time. This is a quality that I love and admire. I explained to Dougie that single mums have impeccable timing. True to word, we took to the stage bang on time, to play a set that was fun and flowing. There is a an Original song that was penned by Martina called One. I have been working on a rhythm pattern all year that perfectly compliments this song. I have a feeling that this is going to be our first single as a collective. I love it so so much.

After the Gig I had my first cider of the day as Victor Pope and his Rock N Roll outfit took to the stage for an impromptu performance that was to be the warm up for their 5pm performance on the main stage. Divine loves Victor Pope. Steven Vickers the lead singer pleasantly surprised me with his song writing brilliance a couple of years ago, in a strip club on Lothian Rd in Edinburgh.I have made sure that I see him and his brilliant band where ever they play. So Bass duties were fulfilled by a very handsome player called Graeme Mackay and with the inclusion of keyboards played by the very beautiful, Jess Aslan. This was the first boogie of the day. It was groovy and relevant. Watching The Victor Pope Band warm up was a thrill, they went from strength to strength.
***
Now this was the first dilemma of the day. Victor Pope and No Quarter were playing at the same time in different tents. So I compromised. I have been following both bands with keen interest for some time. Rebecca Pilcher the amazingly sexy and talented Lead singer of No Quarter took to the stage. As always Divine swooned as she played that guitar and sang with a Rock N Roll finesse that can only be achieved by dedicated practice and performance experience. No Quarter, rocked it. They always do. Once satisfied that I had seen No Quarter shine. I headed for the main stage to see Victor Pope perform fully energized by the earlier B Sides And Rarities set. Divine was having it, Rock N Roll big time. I do miss the Rock N Roll aspect when performing other duties at festivals. So this was a real treat. The next band that I made an extra effort to see, Logans Close. Three lads with impeccable style that perform a sixties psychedelic groove, in parts not far removed from the Jam and late Beatles. again, having seen them perform on many occasions. It is always an excitement that I feel. Logans Close look brilliant and sound even better than they look. This was to be the last performance that I would see with the intention to review, it had been a long day. So my apologies to The Victorian Trout Conspiracy, Colonel Mustard And The Djion 5 and The Girobabies, Divine is coming to review you on separate occasions in the very near future.
*

*
Divine spent the rest of the night and Sunday Morning socializing with friends that are important to me. Round the communal fire and the brilliant love cuddle in The Phoenix love shack yurt. I had such a wonderful time. On Sunday, everyone was so loved up. Although rumors were rife that my first Linkylea was to be my last. When something happens as important as this, one just wants it to happen again and again. and with all funds raised helping poor and underprivileged Children in India. How could there be a greater incentive for the kindness that this event generates. It was an honor for Divine to be involved and participation was nothing other than good karma. Many thanks to Granny Radge promotions for your organization and hard work for keeping the dream alive. Divine had a ball.