Having been to a Belladrum a fair few times before I’m trying to decide if this was the best Belladrum yet! Its a tough decision as they’ve all been great, but for me the line up this year was phenomenal. We arrived on Thursday without any queue’s, set up camp and headed to the main stage just in time for local 11 piece band Scooty & The Skyhooks. With their funky soul and motown tunes they got the party started and had the crowd jumping.

Next up was cheeky chappy Louis Berry, a young lad from Liverpool with a surprisingly mature voice and great guitar skills on songs such as his latest hit, She Wants Me. Berry kept the momentum going leading into the evening and after a short break I had the pleasure of listening to Swedish sister folk duo First Aid Kit. With fantastic harmonies and a truly mesmerising stage presence they had the crowd singing along to hits like Silver Lining and Emmylou and gave a great cover of The Gambler.

Finally the headliner for Thursday night was Sister Sledge….what can I say! What a treat. They brought the love and fun with their energetic stage performance, guests and all the hits including We Are Family, Frankie and He’s The Greatest Dancer, it was the perfect ending to a belter of an opening day. 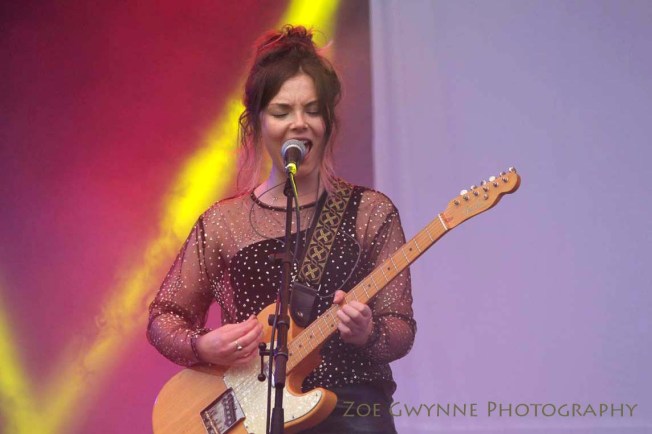 Friday the heavens opened and it rained most the day, but this didn’t seem to dampen peoples spirits, we had a wonder round the stalls and walled garden and headed back to the main stage to watch dynamic grunge duo Honeyblood, despite the rain there was a good turn out, and rightly so! They gave a banging performance of songs such as Sea Hearts and Ready for the Magic and even had a dance competition, the prize being a pair of Cat’s drum sticks. Later in the day we caught the Dub Pistols, who describe themselves as a reggae-breaks-jungle-mash-up! They had the crowd bouncing and breaking out the dance moves.

The rain finally cleared for the days head liners The Pretenders, my mum is a big fan and have many memories of listening to them in my childhood, so who better to watch it with than my mum and son, it was quite emotional!

Having been a fan of Chrissie Hynde and the Pretenders from the early days, I wasn’t quite sure what to expect many years down the line with their live performance at Belladrum this year. However, I wasn’t disappointed as this hit packed set was full of the old Chrissie charisma, with the quality and timbre of her voice even better than before. There were many other highlights from the band including the rip-roaring passionate performance from guitarist James Walbourne, who added his own magnetic blend of talent to the show. The balance of good old rock n’ roll, some softer ballads and a couple of songs from their new album Alone was just right, highlighting the range of Chrissie’s voice. Amanda Gwynne

Saturday the sun re-appeared and we ventured away from the Garden Stage and indulged in a bit of festival fun like the dodgems and helter skelter for wee man and the adult ball bit for the not so grown ups, had a visit down to the Heilan Fields which is in a new location to right of the main stage and then went to check out some of Slow Club in the Black Isle Brewery Grass Roots stage, definitely a band to watch out for.

Next we caught Edinburgh Hip Hop trio Young Fathers in the Hothouse stage for an explosive atmospheric set from the 2014 Mercury Prize Winners who simply blew me away with their intense performance and social commentary, weaving and dancing about the stage.

Shortly after were punk rock band Frank Carter & The Rattlesnakes, who gave a frenetic, frenzied show, strutting around in his very tight animal print trousers , performing songs such as Juggernaut, mental but brilliant at the same time! Just caught the end of Franz Ferdinand and finished the night with a spectacular fireworks display.

Belladrum keeps getting bigger and better without loosing any of the amazing atmosphere and family friendly feel, there is something for everyone whatever age. My only complaint was so much good music on and not enough time and a bit of a queue leaving, but that is to be expected. Bravo Belladrum!