What is instantly noticeable about the Scottish Borders town of Stow, based seven miles north of Galashiels, is the distinct lack of signposting. Not one single piece of cardboard gaffer-taped to a lamppost. However, once one leaves the city bypass via Midlothian and comes out of Bonnyrigg, there is a paradisal country road one drives, winding its way into the belly of the Borders. Travelling behind an alluring 1960’s Jaguar gift-wrapped in wedding bows while listening to Kate Bush’s “A Woman’s Work” on the radio was as reposeful as one could hope to arrive in the village. 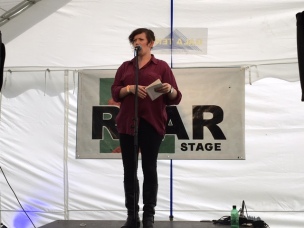 Situated only a couple of hundred yards from the rail station, approximately twelve volunteers helped create the fifth annual Stowed Out festival, home to less than a few hundred revellers. Situated in a small field which could be lapped, at a sprint, in around 35 seconds, the sun boasted where the wild wind and rain in the west couldn’t manage. Two main tents were in situ at opposite ends of the field, one for music and one for spoken word. With between 8 and 10 acts appearing in both tents, the festival organisers intelligently ensured that neither over-played the other tent resulting in healthy numbers gracing both stages and no interference from generous speakers or instruments.

Between both stages, a host of stalls, workshops, catering, merchandise, drinks stalls, and bales of hay to sit on were used by families with both prams and pets welcome. The audience changed towards sunset as a surge of teenagers descended, but all in highly friendly spirits and not in any imposition on the high spirits already in place.

Flitting between the two stages, jinking in and out of stilt walkers, it was a queer sight, seeing one’s name printed on festival t-shirts. The Spoken Word stage, entitled the ‘Roar’ stage, was curated by Selkirk FC’s Poet-in-Residence Thomas Clark, running over the course of the afternoon between 1.30 and 6.15pm. The afore-mentioned organisation of the festival meant that the daddy longlegs, pinned to the sides of the tent, were not alone for long as crowds drifted with the burger smoke in to listen to the former BBC Scotland Poet-in-Residence, Rachel McCrum who delivered an exalted performance in spoken word. Reading poems from her first full collection ‘The First Blast To Awaken Women Degenerate’, Rachel’s vast experience of reading live shone through with delicious lines wrapped with good-natured banter. This set the standard as established Borders poets Brian Hotton, Robert Leach, Sara Clark, and Jules Horne delivered wonderful sets including homages to Indian Gods and Chinese translations. Alongside Thomas (Clark) and St Johnstone FC’s Poet in Residence Jim Mackintosh, I competed the three football poets in residence appearing on stage for the first time to read poems from the Football Memories project ‘Mind The Time’ book, and other favourites prior to the spoken word segment being wrapped up by Star Trek-humour in the shape of Tom Murray and one of my own poetry highlights, Anita Jones before I closed the tent with a 15-minute set. 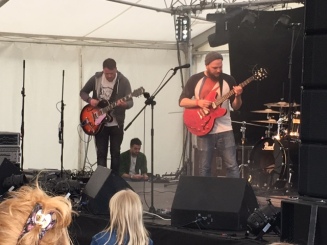 On the music side, everything from Dance Ihayami to rock outfit Slim Mistress kept the young families entertained with young children bopping near the front of the stage, waving happy-face balloons and wearing ear-protector headphones: a highly entertaining sight during the melancholic sounds of The Boy With The Lion’s Head, singing about “blood in the lungs”. A fine set was followed by The Youth and The Young, the quite enchanting Emme Woods whose bluesy songs really do set the young songstress apart from other performers in Scotland right now, The Little Kicks, and the soaring ascendency of the Thompson sisters, more commonly known as The Van T’s. 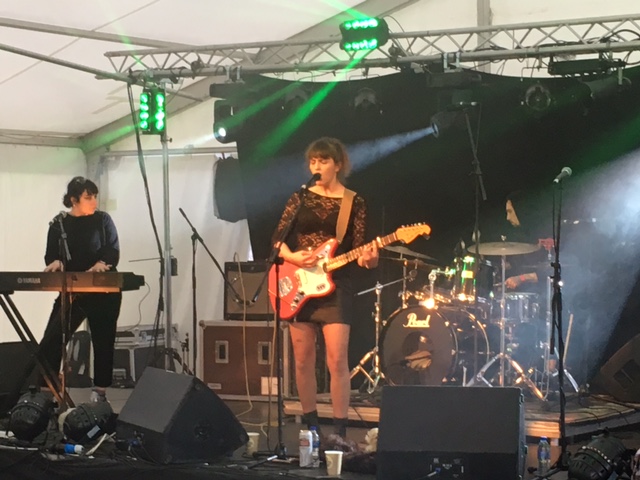 All this apart, Thomas, Jim and I were also invited by anti-sectarian charity Nil By Mouth to participate in a Poetry and Penalties competition held on the football pitches opposite the festival. In goals was NBM organiser Dave Scott, and I was glad to take the trophy home to Dumbarton after a nail-biting sudden death shoot-out with St Johnstone’s Poet-in-Residence who saw his final kick unfortunately hit the stanchion of the post and crossbar.

Departing the festival, listening to Gil Scot-Heron and gazing into a sunset-kissed Pentlands, it’s fair to say that Stowed Out and its organisers deserve a large pat on the back. Any organisation trying to cater for its community, encourage the young to pick up an instrument or find their voice, is a hero in times when the country appears crestfallen, unsure how to bring the feel-good factor back into its bones.