Hello John, where are you from & where are you at, geographically speaking?
I was born and live in South Birmingham in a town called Northfield.

How did you develop an appreciation of Music?
I’ve been into music for as long as I can remember. I have memories of dancing to ‘Surfing USA’ as a child, listening to my parents Dubliners record growing up, getting into Punk in my early teens and discovering Dylan and picking up the guitar. Through out my twenties I was trying to be a musician whilst having a very business oriented job.

When did you first get into events?
I dipped my toe into promoting when I was around 20 years old. I put a show on and made £200 then I lost £600 on the next. That put a stop to it for a while. Naturally, the business job didn’t sit well with trying to be a musician. The manager of my band also ran a festival so as soon as the job came up at the festival I jumped at it starting off as a festival assistant and now I am the festival manager.

You’ve got three famous musicians coming round for dinner. Who would they be & what would you cook; starters, mains & dessert?
Ha! Definitely Dylan. He is invited everywhere. I like Black Flag but for his personality and intrigue Henry Rollins. Finally, I’d probably invite Jimi. I think that would be some party. As for food they are coming to England so it would be Fish. Chips and Mushy Peas 🙂

Where, when, why & how did you get involved with the Mostly Jazz Funk & Soul Festival?
As mentioned I was working for a company running the office and this job opportunity came up. It was for less money initially but doing something that I really wanted to do was the key. Definitely recommend it to anyone.

Who have been some of your favorite bookings over the years?
I think we’d all agree here that Chic was the best booking for Mostly Jazz Funk & Soul. We booked them just before they released Get Lucky and the Chic resurgence began. It sold out and the atmosphere was incredible. Another Mostly Jazz Funk & Soul booking would be Public Enemy. Sugarhill Gang pulled out with a month to go. There was a lot of panic to get a new headliner but we managed to get public Enemy and the announcement couldn’t have gone any better. Plus they were all lovely and played a killer show!  Away from the festivals we promote other shows. I think my favourite would have to be John Prine. A lot of people in Birmingham had been waiting for John to come to Birmingham so I was glad to be the man behind that. Robert Plant came down as he is a big Americana fan.

What have you got for us this year?
This year is the 10th anniversary so we really wanted to deliver something special with our headliners. We managed to get Burt Bacharach as our Sunday night headliner which we were all buzzing about. After that we managed to secure The Jacksons for Friday night and The Brand New Heavies for Saturday night. We then rounded off the line up with some cool contemporary artists such as Ibibio Sound Machine, JP Bimeni & The Blackbelts, Oscar Jerome, Ishmael Ensemble and probably the act I’m most excited about Khruangbin!

How the hell did you get Burt Bacharach to play?
When it comes to booking the bigger artists there is always a little bit of luck. We got in contact with Burt’s team just at the right time. They were planning a couple of dates in London and were looking for interesting events for him to play. Our date landed two days before his London shows. It is the way it works out sometimes. What works one year won’t work the next.

What allowance do you make for local acts gracing the stage?
We pride ourselves on promoting local music at our events. We have 2 stages that sit side by side and alternate so the 2nd stage artists play in behind the main stage artists to the same crowd. This means the music is pretty much constant all day! It also means we can programme local artists on the second stage so for example, Delta Autumn (Birmingham band) will be playing between Khruangbin and Burt Bacharach.

The Festival is held in Birmingham’s Moseley Park, how does that help the vibes?
Moseley Park is definitely one of the more interesting festival sites in the UK. It is set in heart of Moseley which is a village recently voted as the #1 place to live in the UK in Sunday Times. The park is set in a gated park was has natural slopping amphitheatre towards a lake. It truly is a beautiful site. As we are surrounded by houses we finish in the park around 22:30 and the crowd head into the village and local pubs. Perfect format for a music event! 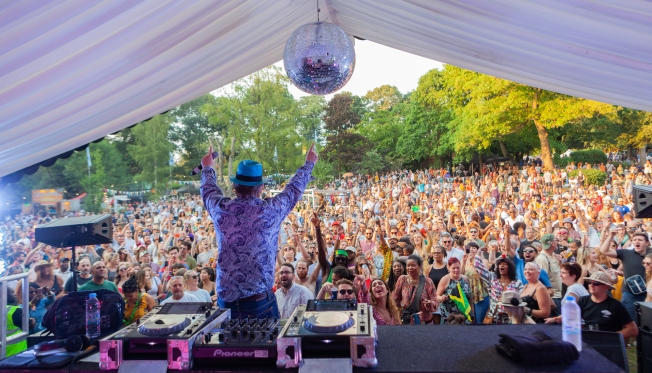 How has the Birmingham community taken to the festival, & do you have a wider catchment?
We actually achieve between 30-35% from outside of West Midlands which is quite good for a non camping event. The local community has taken to it extremely well. It has contributed to culture and vibe around Moseley and we rarely get complaints. We are quite forthcoming in conversations on how to improve and make it easier for local residents.

To someone who has never been to MJF&S, what can they expect?
I think the venue will steal the show when you first walk in. Its a welcoming site and extremely small so the atmosphere is incredible. Plus it is always good to not have to walk far. I think how close you can get to the stages is a real selling point as well. The stages are low so you can really get into the set and music. We have plenty of cool little bars, food stalls and you can re-enter which is a rarity at festivals. Above the music is what we all go for. There is a great mix flowing from Jazz, Funk & Soul with some addition of Hip Hop, Afrobeat etc. I really do think its one of the parties of the summer.